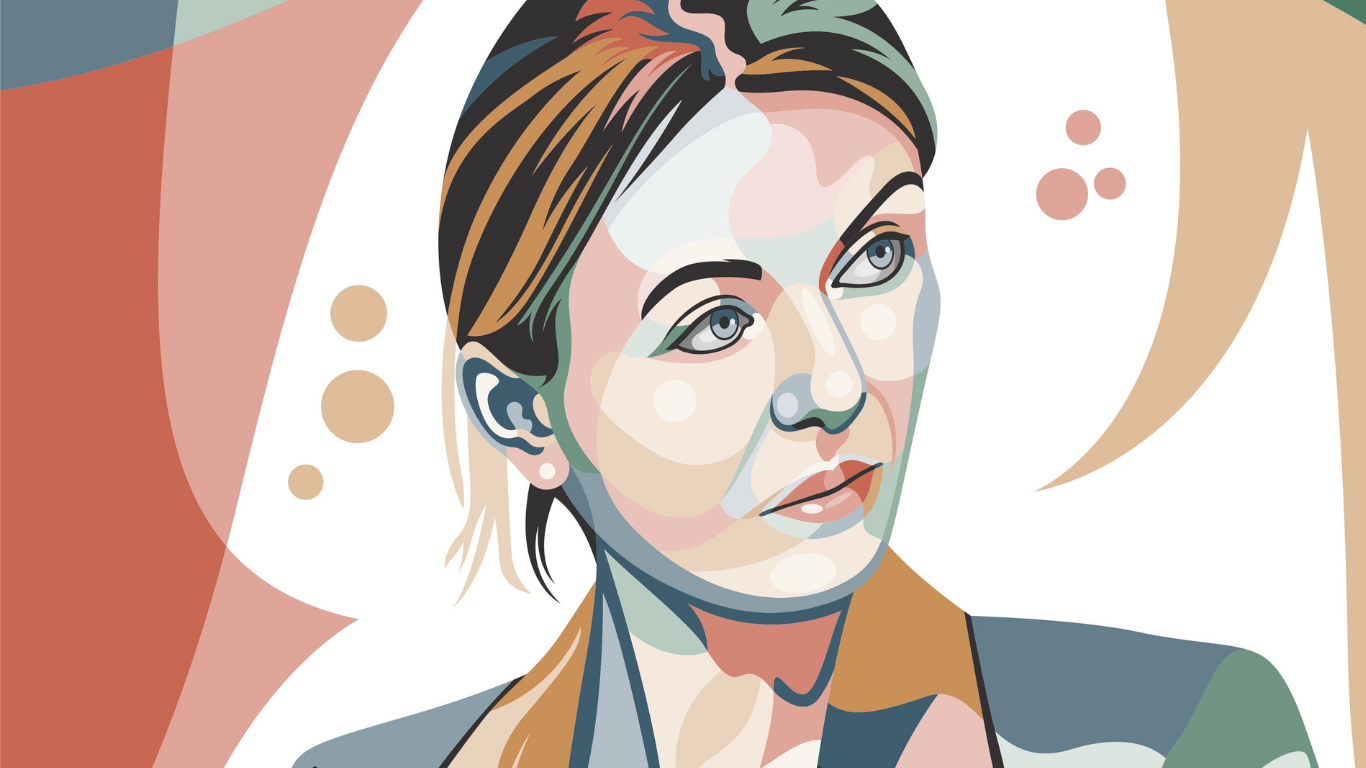 From ultra-brave war protestors to uncovering the truth about motherhood in the workplace, I would like to showcase my hero’s, who have inspired me by their strength, in some cases risking their safety and freedom with the goal of driving change and powerful discussions. Most of these women have children, young children, which was the root of their drive and energy to make a difference and be the change.

Marina Ovsyannikova, a Russian journalist (Channel One) was apprehended on Monday 14th March 2022 after interrupting a live news broadcast. Ovsyannikova, appeared in the background, holding up an anti-war message which read “Stop the war… don’t believe propaganda. They lie to you here”. (She was on air for 5 seconds).

She was later fined 30,000 roubles (£215/$280) for defying protest laws and could still face further charges under new Russian laws.

As a result of her action, this is becoming a public demonstration as two individuals from Channel One and one from NTV have since handed in their resignation with others contemplating their resignation.

Ovsyannikova wanted to prove to the world that Russian people are against the war.

The Russian-based human rights groups later released a prerecord statement by Maria Ovsyannikova which expresses her opinions on the war. Ovsyannikova, continues to explain her family ties to Ukraine whilst calling the war “fratricidal”. She then boldly calls Putin by his name and demands he puts an end to the Ukrainian invasion whilst encouraging Russian citizens to protest, because only they can end this “madness”.

On February 1st, 2022, Lara Balazs reworked an article written by Mark Duell (published Jan 28th, 2022) on the opportunities that are being missed by women working from home. Balazs redirected the focus to employers missing out on women, due to the lack of support mothers receive when working from home.

Consequently, the post on LinkedIn accumulated over 800 shares, over 24,000 impressions and over 1,000 comments. It also exceeded on Twitter as it received 26 retweets, 2 quote tweets and 51 likes. Additionally, this 'impressive stunt' was the catalyst of an important discussion amongst women, men, mothers, employers etc. as they began to reflect on the damages this article caused.

Nazanin Zhagari-Ratcliffe, 43 years, has a dual British and Iranian citizenship. Zhagari-Ratcliffe previously worked as a project manager in London for a media charity organisation.  Whilst visiting family on holiday in Iran with her daughter Gabriella, Zhagari-Ratcliffe, was detained by the Iranian government for allegedly spying and plotting to overthrow the Islamic Republic regime in April 2016.

September 2016, Nazanin was handed a 5-year sentence and subjected to intense interrogation for the first 2 months of her imprisonment. She undertook severe conditions of isolation, windowless cells, hunger strikes and even considered suicide, yet an image of her family kept her going (daughter & husband).

April 2017, Nazanin lost her final appeal, as the Iranian Supreme court overturned her sentence. However, one year later, she was granted a 3-day release where she was reunited with her daughter.

In January 2019, Richard and Nazanin embarked on a hunger strike in protest to the poor conditions and lack of medical treatment received.

Nazanin later received temporary leave in March 2020 (due to COVID-19) and lived with her parents in Iran. A year later she was sentenced toa further year in prison and a one-year travel ban after being found guilty of propaganda against the Iranian government.

March 2022, Nazanin was officially released, and returned to The UK with her daughter and husband. The UK also settled the military dispute with Iran. Nazanin’s family claims she had been held hostage to force The UK into settling a £400 million dispute with Iran (During the 1970’s The UK sold Iran military tanks, but after the 1979 Islamic Revolution The UK refused to deliver the tanks despite payment).

Nazanin continues to fight for the injustice and wrongful detainment of individuals being held or who have loved ones in Iran.

Mother of 3 and Ukrainian MP Lesia Vasylenko, states that she has armed herself with guns at her home in Kyiv and has every intention of using them (in self-defence). Vasylenko, expresses that holding a firearm has become a necessity for ordinary citizens of Ukraine.

“It's a matter of survival for all women across Ukraine right now”.

“I do have a gun, I have several in fact,” she said. “I do have an intent to use them if me or my family get attacked."

“It’s really hard to do because every mother wants to spare their children the pains and burdens of war and the fear that comes with it.”

Vasylenko has since rewritten her weekly to do list (which included manicures and pedicures, taking the kids to extracurricular classes etc.). She cut her nails off, in order to use the guns which her father taught her how to use as a child.

Additionally, her story has caused other women (from the Ukrainian parliament and army) to also pick up weapons to fight alongside men (shoulder to shoulder) for their country, families, and lives. Some women joined the territorial defence units (training on how to use weapons) – which they are serving alongside men, others will help with providing food and protecting clothing e.g., helmets and some are now working with information, to help citizens with understanding how they can provide accurate support to the AFU (coordinating tanks and military machines etc.).

These women are diverse. Some are students, businesswomen, politicians etc., yet they have all united to help and support their country and the people of Ukraine.

Erica Ballard created a LinkedIn post that went viral with over 2.7 million views. The post highlighted the reality of a working moms life, staying up all night with a baby and then going into work the following day. It struck a chord with the majority and gained huge traction, having showcased the honesty of a working moms life; something that is never discussed publicly. Moms usually try and hide the human aspect of being a mom in the working world.

Ballard is encouraging women to have a healthy discussion about their own personal experiences alongside getting individuals to speak up on their stories to show the truth/outline steps they undertook to create a family-friendly work culture.

With this post many women came out with their individual stories on how they manage working successfully and being a great mum.

E.g., Tracy Gunn (co-founder of Platorm55) found this post to be really inspirational as she goes on to share how employers can be encouraged and supported.

3. Have conversations about flexibility

4. Talk about pressure points + have action plans when kids are sick etc.

Evan Rachel Wood is an American actress, model, singer and mother. In 2018, Wood became an activist for domestic violence and sexual assault victims, as we would testify in court to law makers. At this time, she did not name the individual who abused her, but in February 2021, Wood publicly named her abuser as “Brian Warner, also known as Marilyn Manson”, which she was in a 4-year relationship with.

Wood soon goes on to showcase her story through a documentary on HBO named Phoenix Rising (which premiered on March 15th). This documentary details her relationships and journey in naming her victim.

Since Wood shared her experiences, a total of 16 women were reencouraged to come forward on the mistreatment they underwent in the hands of Manson. This detailed emotional and physical abuse and 4 victims suing him for sexual assault, despite Manson strongly denying the events.

Additionally, individuals in Manson’s team put his behaviours down to his edgy stage persona.

After coming out, Wood noticed an instant transformation in herself (more energy, no chronic pain or mental stress). But all in all, she felt her true self again. She claims, she is amazed that she got out of the situation alive, and when dwelling on all the survivors who don’t, she becomes impassioned and wide-eyed.

“I still have scars” from the relationship, she says, crossing her arms around her waist. “That was the darkest time of my life, honestly.”

If you’re a woman who can’t be shamed, you’re pretty much unstoppable.”

“There is a freedom that comes with ripping off the Band-Aid,” she says, “and doing the thing you’re most afraid of.”